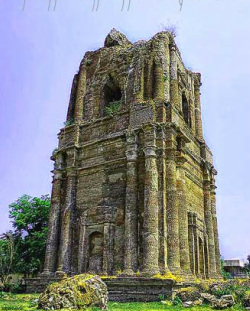 The Bacarra Bell Tower is located at the right side of the Roman Catholic Church.

Constructed under the supervision of Fr. Pedro Berger, church priest from 1828 to 1848.

It was built in 1830’s and made up of coral blocks and stocco with an original height of fifty (50) meters and a three (3) storey with a wall of five (5) meters thickness. The earthquake wrecked it in 1931, which had caused the top most portions to tilt a little sideward on the right.

The August 17, 1983 earthquake had caused the total fall down of the dome and it became popularly known as “THE DOMELESS DIGNIFIED BELLTOWER OF ASIA”. It was featured many times in prints representing  Ilocos in the Department of Tourism fliers.

The tower serves not only as a tourist attraction but also as a historical landmark of the painful sacrifices of the ancestors of the Bacarreños who rendered forced labor under the Spanish conquerors.